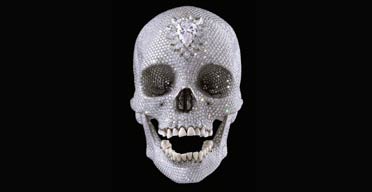 Damien Hirst: For the Love of God, 2007. Foto: Getty ImagesÂ

You can whack them with a shovel. You can shoot them, poison, stab or throttle them. You can threaten their families and you can hound them in the press; you can put them down any way you like, but some artists refuse to stay down. What does this tell us? That artists are the undead? Or, worse, that criticism is in crisis? At almost every international art fair over the past few years, there has been a panel discussion about the crisis in art criticism. I have found myself talking about the topic in London, Madrid, Berlin and Miami. Wherever critics are paid to gather (you wouldn’t catch us in the same room otherwise), they go on about the crisis. These debates have become an occupational hazard – but they also pay well. If I had known there was money in it, I would have invented a crisis myself.
At Art Basel in Miami Beach last December, just as we were about to go out and perform on the imminent death of criticism and to answer such questions as “What is art criticism today and why is it relevant?” and “Is money the new art criticism?”, the Las Vegas-based critic Dave Hickey said he felt like Donald Duck at the Last Supper. Being Donald Duck is at least livelier than being a dinosaur, drowning in a dismal swamp. Verder lezen/Continue reading klik/press http://arts.guardian.co.uk/art/visualart/story/0,,2266222,00.html